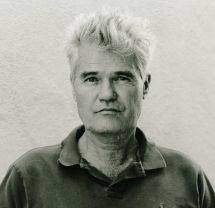 One of the originators of the Western pop art movement, Billy Schenck incorporates techniques from photorealism with a pop art sensibility to both exalt and poke fun at images of the West. Schenck is known for utilizing cinematic imagery reproduced in a flattened, reductivist style, where colors are displayed side-by-side rather than blended or shadowed. In the August 2014 issue of Southwest Art magazine, his work was described as “a stance … a pendulum between the romantic and the irreverent.”

With over 100 solo shows in the U.S. and Europe, career highlights include the Briscoe Western Art Museum’s 2018, Andy Warhol Cowboys and Indians and Billy Schenck Myth of the West retrospective, Denver Art Museum’s 2011 Western Horizons and the 2013 Utah Museum of Fine Art’s exhibit Bierstadt to Warhol: American Indians in the West.

A genuine cowboy himself, Schenck is a ranch-sorting world champion and the proprietor of the Double Standard Ranch in Santa Fe, New Mexico, his home for the past two decades.