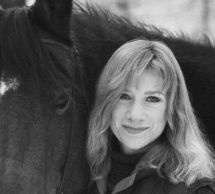 While a student at Michigan State University, Bonnie Marris illustrated several books, including a mammalogy text by a leading expert in the field. The book attracted the attention of noted zoologist George Schaller, who invited Marris to prepare the art for posters to support his worldwide rare-animal relief programs. Each year, Marris makes several field trips to study her animal subjects and this close proximity gives her the confidence to paint them in their natural surroundings.

She and her husband, Woody, live on a farm in Ada, Michigan, with two dogs and three horses. Bonnie Marris is represented by Broadmoor Galleries, Colorado Springs, Colorado; and Trailside Galleries, Jackson, Wyoming, and Scottsdale, Arizona.