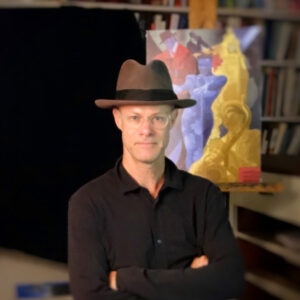 Since he graduated from the Art Center College of Design in 1983, Haynes’ artwork has been represented in New York, San Francisco, St. Louis, Kansas City, and Santa Fe. Recent institutional commissions include murals and large scale paintings for the Kauffman Foundation in Kansas City, the Missouri Botanical Garden’s permanent collection, and the Westward Expansion Memorial Museum at the Gateway Arch.

“Haynes paintings feel familiar. His heroic history works have been likened to the WPA style of the 1930s as well as to that of American Dreamers Norman Rockwell and Maxfield Parrish. Haynes (fairly) claims himself a descendent of Thomas Hart Benton and John Steuart Curry by calling his work Neo-regionalism. His paintings build upon the early-20th century Regionalism movement by including images, events and some of the artistic innovations of the past 100 years. The physiognomy of his figures calls to mind the strong, swaying bodies found in Benton’s Cradling Wheat (1938) and Curry’s The Mississippi (1935) at the St. Louis Art Museum. And like the figures in Benton and Curry’s paintings, each man and woman found in Haynes’ paintings is made noble in the face of an adversity that smacks of adventure.”