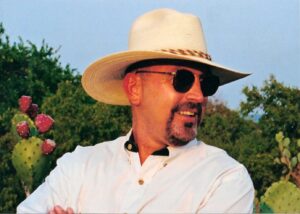 ARTIST GEORGE HALLMARK’S creative career has spanned nearly five decades, progressing from draftsman to commercial artist to renowned oil painter. His subject matter is primarily architectural, focusing on the types of structures most often found in Mexico or along the California coast. Known for his precise architectural realism, he gives each of his compositions of missions, churches, cantinas, and other structural features an infusion of layers of light and elements of the natural world. His brushstrokes deftly capture the quiet moments of everyday life, offering a glimpse into exquisitely calm settings and beautiful surroundings.

Mark Maggiori’s first views of America were framed within the front windshield of a car making its way from New York to San Francisco. That month-long trip, filled with majestic views of the national parks and timeless glimpses of the west, was made when mark was only 15 years old and on vacation far from his home in France, but its impact would ripple throughout his life and set into motion his great fascination with the west.

Years later, back in Paris, he would enroll at the famous Academie Jullian, where western greats Ernest l. Blumenstein, Burt Geer Phillip and Joseph Henry Sharp had also studied before they helped form the Taos society of artists.

After being formally trained in academic drawing, mark’s life would take an important detour through music after he formed a successful band that led to many opportunities in Europe, including into other artistic disciplines such as animation, photography and filmmaking—each one informing his artistic creativity in unique ways.

After great success in the music industry, mark was lured back to the United States thanks to his muse, creative equal and wife, Petecia Lefawn Hawk. They journeyed through the west and their trips immediately took him back to that original road trip two decades earlier, the trip that opened his eyes to the beauty of American west. It was then, at the age of 36, he made the decision to paint western art. they staked temporary claims in out-of-the-way places such as chloride and Kingman, Arizona, where the desert offered its stunning inspiration and where mark quickly began to produce some of the most audacious western paintings of a new generation—audacious because mark was still brand new to the western art world, and also because he was an outsider, a Frenchman, with a profoundly unique view of the American cowboy. in the space of just a few short years mark rose through the ranks to become one of the premier western artists working today.

His work brought many new opportunities, including important solo and group shows, and a significant showing at the 2017 night of artists at the Briscoe western art museum, where he won the Sam Houston award. He also began to expand more artistically: he started to work more in plein air; he spent time on ranches with cowboys and on horseback to acquaint himself more with the western way of life. He spent time in New Mexico, Arizona and Wyoming and began adding additional figures to his works and new kinds of compositions to his growing arsenal.

Like Henry Farny, another Frenchman who made his way to the southwest to paint its interesting inhabitants. Mark has carved a unique place for himself within Western art, a place where his work—part Frank Tenney Johnson, part Herbert “buck” Dunton, with shades of Tom Ryan and Bill Owen—continues to provoke the minds of young and old Western collectors alike.

Don b. Huntley spirit of the west award at the Autry’s masters of the American west.

Don b. Huntley spirit of the west award at the autry’s masters of the American west. 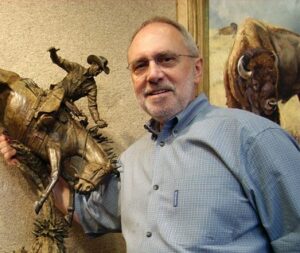 Rob Pitzer established Pitzer’s Fine Arts in 1978 beginning with respected and notable sculptor Kent Ullberg. Representing diverse, original artwork from more than 40 recognized fine art painters and sculptors, we have grown into a noteworthy gallery in Wimberley Texas, the Heart of the Texas Hill Country. Many of our artists participate in noteworthy museum shows, including The Briscoe Western Art museum in San Antonio, Texas and the National Cowboy & Western Heritage Museum in Oklahoma City, OK. 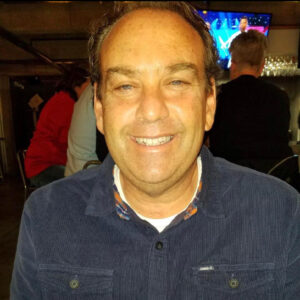 Joshua Rose is the Editor of Western Art Collector, American Art Collector, American Fine Art, and Native American Art magazines—all publications that address trends and developments in the Western art world. Rose travels extensively to attend, present, and jury key art shows and exhibitions across the country. Based out of Scottsdale, Arizona, his work and writing centers on the historic and contemporary art world with an emphasis on the genre of Western art.