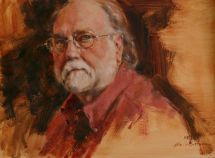 John Austin Hanna grew up in Beaumont, Texas, and has always had a passion for art. His paintings have been exhibited at the Salmagundi Club in New York, Trailside Galleries, Southwest Gallery, Marta Stafford Fine Art in Marble Falls, Texas, and his family gallery, RS Hanna Gallery in Fredericksburg, Texas.

During his time in New York in the 1960s, Hanna was lucky to work with many artists with at the Art Center, Pratt Institute, Art Students League, and School of Visual Arts: Howard Terpning, Tom Lovell, Frank McCarthy, Bob Kuhn, Robert McGinnis, Kenneth Riley, Mitchell Hooks, and other great illustrators who were there at the time.

Hanna has won many awards in his long career. The Houston Livestock Show and Rodeo commissioned him for a private collection of his work from 2005–2012. His work has been included in the Texas Ranger Hall of Fame show, and in 2013, he was honored to receive the Donor’s Award of Excellence at the Oil Painters of America National Exhibition.

As an illustrator for twenty years in New York and Dallas, Hanna has worked for Boy Scouts of America, Ian Fleming, and Warner Bros. His work has been published in Automobile Quarterly, Car and Driver, and Town & Country. Hanna has worked for Mercedes, Volkswagen, Bell Helicopter, Lockheed Martin, Borden’s, Pearl, Coors, Phillips 66, and Shell Oil. His paintings can be found in books published by Harcourt Brace, World, and McGraw Hill.