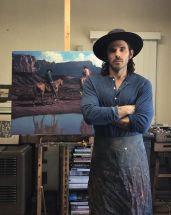 Mark Maggiori’s first views of America were framed within the front windshield of a car on the way from New York to San Francisco. Maggori made that month-long trip when he was only fifteen years old and on vacation far from his home in France, but its impact rippled throughout his life and set into motion his great fascination with the West.

Years later, he enrolled at the famous Académie Julian in Paris. After his formal training, Maggiori formed a successful band that brought him many opportunities in Europe, including into other artistic disciplines such as animation, photography, and filmmaking.

Maggiori was lured back to the United States by his muse, creative equal, and wife, Petecia Lefawnhawk. They journeyed through the West, and at the age of thirty-six, he decided to paint Western art. In the space of just a few years, Maggiori has become one of the premier Western artists.