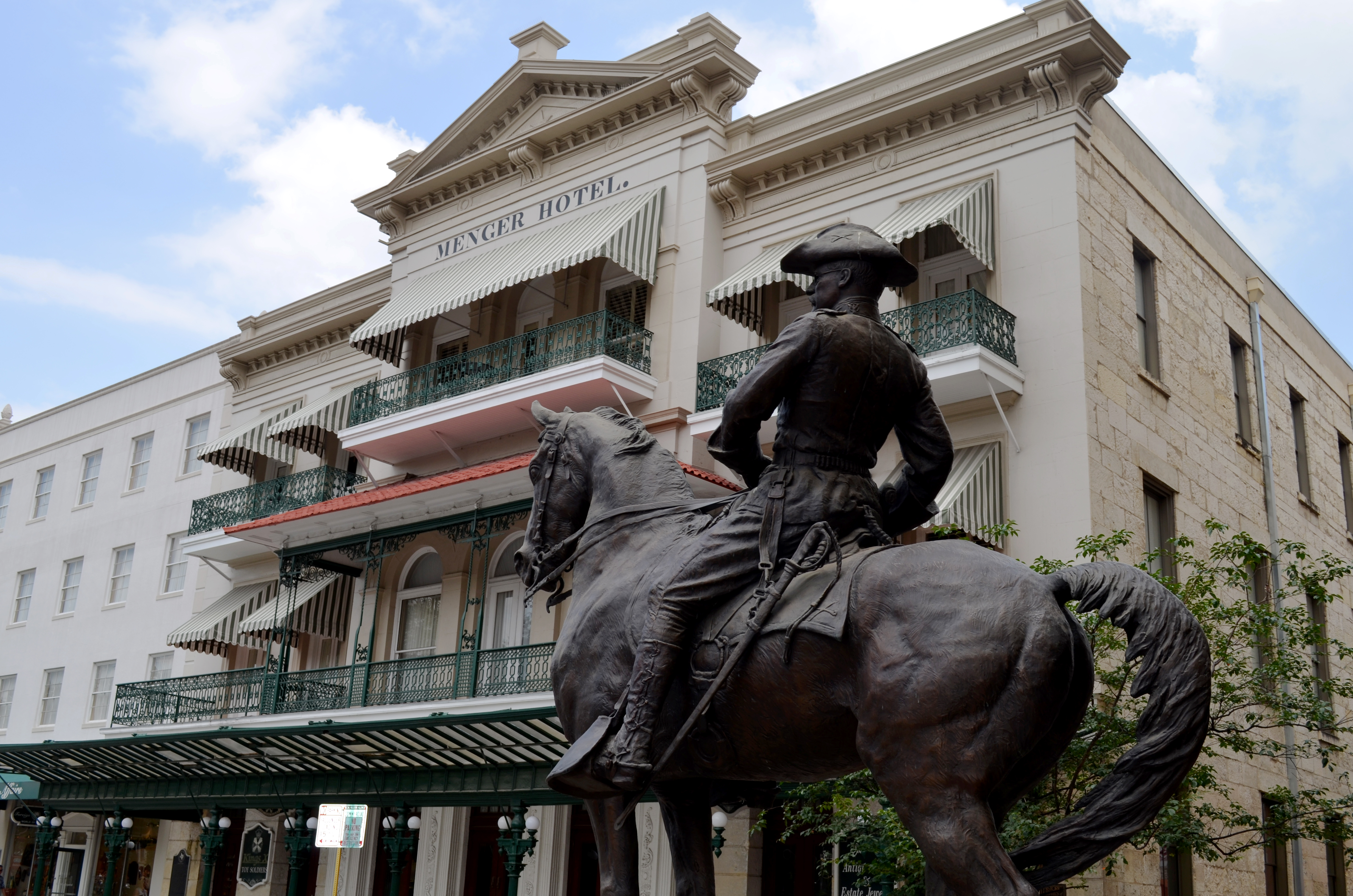 A new bronze statue of a young Teddy Roosevelt on horseback celebrates the San Antonio connection with one of the most distinctive characters in American history, who rode a wave of fame to the White House.

But scooters and horse carriages surround the unmarked 12-foot-tall sculpture on the sidewalk by the Joske’s building, hardly a fitting tribute to the man who trained the Rough Riders here for battle in Cuba during the Spanish-American War.

But the location is temporary, and the statue will be moved to the center of Alamo Plaza when it is remade under a multimillion-dollar plan that eventually will close the site to vehicles and move the Cenotaph about 500 feet to the south.

Tom Jackson, a retired lawyer who has studied Roosevelt for nearly 30 years and portrays him at special events, said the current location is just fine and is near the historic Menger Hotel, which is celebrating its 160th anniversary.

“What better place to have a statue of a Medal of Honor recipient than the hotel he’s most associated with?” said Jackson, a Texas history enthusiast who also portrays other historic figures.

Roosevelt’s visits to the Menger and San Antonio reveal different phases of his life. He was born into a wealthy New York family and reared as a sickly boy with asthma before becoming a war hero and robust outdoorsman and conservationist, Jackson said.

His time here in 1898, when he trained with his volunteer Rough Riders, marked the start of a new chapter for one of the most important figures in world history, Jackson said.

The sculpture is part of a 14-piece Alamo Sculpture Trail that, when completed, will link the Alamo to the Briscoe Western Art Museum about two blocks south. Four new statues, along with two originally cast for display at SeaWorld San Antonio and then donated to the city and placed at the Convention Center, were installed at the Alamo in April as part of the trail.

The latest work, titled “Theodore Roosevelt, Rough Rider,” by Alexander Phimister Proctor, is a duplicate of one dedicated in 1922 in Portland, Ore. A plaque identifying Roosevelt has been ordered for the piece, said Jack Guenther, past board chairman of the Briscoe and principal with Sculpture Trail, a private group leading the project.

“People have raised a lot of questions as to who he is” since the work was installed May 31, Guenther said.

Michael Duchemin, president and CEO of the Briscoe, said the Roosevelt sculpture is the only one of 11 to be placed at the Alamo that is not connected to the 1836 siege and battle. When the plaza is remade, it will be moved next to the Menger Hotel Bar.

“Theodore Roosevelt Jr. stands apart as one of America’s most unique citizens. An American president, rancher, author, adventurer and conservationist, Roosevelt strove to embody the concept of ‘the strenuous life,’” Duchemin said, referencing an 1899 speech in which Roosevelt called on Americans to embrace a commitment to overcome challenges.

Roosevelt’s first widely known visit to the Menger was in April 1892, when he hunted wild hogs in South Texas, killing two, including one whose head was mounted and displayed in his home in New York state.

The February 1898 sinking of the battleship Maine in Havana Harbor, claiming 260 lives, resulted in a U.S. declaration of war against Spain two months later — though the sinking was later attributed to a coal explosion and not a mine, as originally suspected. Roosevelt resigned as Navy secretary to train the 1st U.S. Volunteer Cavalry Regiment, serving as a lieutenant colonel under Col. Leonard Wood, the commander.

Wood set up a recruiting station next to the Menger Bar. But Jackson, the history buff, dismisses as folklore an oft-told account that Roosevelt recruited inebriated men in the bar. The regiment spent many hours at the bar after training but had an enlistment table there for only one day, he said. Wood once reprimanded Roosevelt for fraternizing and drinking with the enlistees.

Enthusiasm for the cause of Cuban independence fueled a rush to join the regiment, which trained south of town, in the area of today’s Riverside Golf Course along Roosevelt Avenue, in May 1898. Former Texas Rangers, cowboys and ranchers joined Ivy League school athletes and volunteers from New Mexico, Arizona and Oklahoma in a force of about 1,000 men.

In his book, “The Rough Riders,” Roosevelt described the former rangers as “splendid shots, horsemen and trailers” who were tough and brave and “needed no teaching.”

The men were here for only a few weeks but were treated as celebrities and given a patriotic farewell concert before boarding two trains to Florida. The Battle of San Juan Hill, on July 1, 1898, was remembered as the bloodiest, most famous battle of the war and the greatest victory for the volunteers. Roosevelt was posthumously awarded the highest military award for valor in 2001.

The tide of fame carried Roosevelt to political prominence. He was elected governor of New York and then vice president under President William McKinley, whose 1901 assassination made Roosevelt, then 42, the youngest president in U.S. history.

After being elected to his first full presidential term, Roosevelt returned to San Antonio for a reunion of the Rough Riders in 1905. He gave a review of troops at Fort Sam Houston, delivered a speech in Alamo Plaza and attended a reception in the Menger.

He came back to San Antonio while no longer in office in 1911, less than eight years before his death at age 60, and addressed a crowd from a Menger Hotel balcony, saying there was “no city or town that has a greater claim on me than San Antonio,” the San Antonio Light reported on March 13, 1911.

During that spontaneous nighttime speech, given to a crowd that had long awaited Roosevelt’s arrival at the hotel, he referenced his previous San Antonio visits, starting with one as a cattleman in the late 1880s, according to the Light.

“This time I just dropped in to say howdy and thank you,” he said.