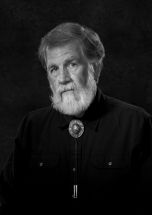 A master of color, composition, and emotion, R. Tom Gilleon connects formal elements into narratives of enduring Western themes. His boldly luminous tepee paintings belie an economy of detail, a mythical glow achieved in a modicum of brushstrokes.

Such succinct vision stems from Gilleon’s personal connection to his subjects. Born in 1942 along the Suwannee River in Florida, he was raised by his grandfather, a Scottish immigrant, and his grandmother, a full-blooded Cherokee, descendant of tribal members who refused to take part in the Trail of Tears. After studying at the University of Florida and then joining the U.S. Navy, he began to focus on art and design at Ringling College, a degree he parlayed into a job as an illustrator for NASA’s Apollo space program. From NASA, he moved to Disney and other theme-park design groups, lending his narrative skill to the storyboards of iconic Disney films like Dick Tracy.

“My interests are so varied that it’s only natural that my art is varied,” Gilleon says. “What makes a good painting is the implication of a story being told and the visual connection between shapes.”

Gilleon’s work has garnered high honors. The Booth Western Art Museum purchased his Northern Plains for its collection; the Jackson Hole Fall Arts Festival honored him as the 2009 featured artist; he is the first living artist to be given a solo show at the C.M. Russell Museum; and his paintings have graced the covers of many magazines, including Southwest Art and Western Art Collector.