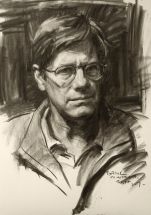 Ralph Oberg grew up hiking, camping, hunting, and climbing in the high mountain wilderness of Colorado and the West. He has traveled extensively across the US, sketching on-site and photographing, aiming to share his experiences through his art. Larger works are produced at his studio in Montrose, Colorado, where he and his wife, painter Shirley Novak, live within sight of his beloved San Juan Mountains.

Oberg is a member of the Society of Animal Artists, Plein Air Painters of America, the Northwest Rendezvous Group, and California Art Club. His work has appeared in Art of the West, Southwest Art, Sporting Classics, Western Art Collector, Western Art and Architecture and Wildlife Art magazines.