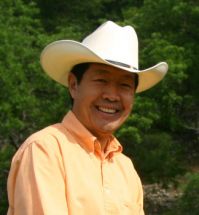 Born in the year of the Horse, Xiang Zhang (pronounced “Shong Zang”) grew up in China. After graduating from the Central Academy of Drama in Beijing, he received his master’s degree in fine art from Tulane University in New Orleans. Upon moving to Texas, Zhang combined his love for painting horses and portraiture to develop his art. Zhang is an American Associate Living Master of the Art Renewal Center in Port Reading, New Jersey. In 2016, he was awarded the Committee’s Choice Award for Two-Dimensional Art.

Based on Zhang’s observations on working ranches, his work reflects the symbiotic relationship between the cowboy and his horse. Using scintillating colors and bravura brushwork to capture the drama of ranch life, he has created a definitive style that has catapulted him to new heights in the art world.

Zhang’s work has been exhibited in prestigious national shows such as the Prix de West at the National Cowboy & Western Heritage Museum, Oklahoma City; Night of Artist at the Briscoe Western Art Museum; and Autry Museum of the American West’s Masters of the American West in Los Angeles. He has had numerous successful one-man shows, and his work has been featured in Western Traditions, Contemporary Artists of the American West, Art of the West, Southwest Art Collector, Fine Art Connoisseur, and numerous other publications. He currently resides in Dallas, Texas, with his wife Lily. Xiang Zhang is represented by Southwest Art Gallery in Dallas, Texas, and McLarry Fine Art in Santa Fe, New Mexico.